I've mentioned before that, heretofore, I haven't done much in the library to support reading, beyond the occasional book display. I would like to start a book club, but I don't see myself buying 10 or more copies of each book, and in Mongolia, it's not like they can run to their public library.  I AM their public library! 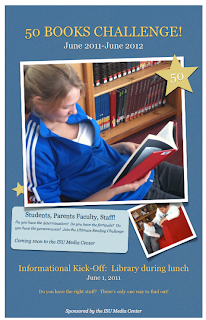 So I've been wondering how I was going to do this, when I ran across someone mentioning their 100 Book Challenge on LM_Net.  I don't remember who it was, unfortunately, but it sounded like something she was doing herself, but blogging about it so students could follow along, and maybe even join in.

That sounded like a good way to go; when I ran it by admin, they balked at 100 books, which is over two books/week.  Thus, we are now the 50 Book Challenge!

But how to hold the students accountable for their reading?

Originally, I thought I'd create a VoiceThread, have students upload images of their book and record a brief review.  Then I decided it would be a great way to promote more extensive use of Destiny and to use the review feature. Since I have to approve all reviews, I can keep a tally chart in Excel of the # of reviews for each student.  Now, we only have individual accounts for grades six and up; I think younger students who want to participate will have a sign-off sheet their parents can initial.

I do want to encourage parents to do this, also...I guess they'll be on the honor system!

At the end, for everyone completing  the 50 books, we'll have a pizza party and Best Book Smackdown.

Novels they read for class can count as part of their 50, and I'll put together a handout of suggestions, and have regular guest reviewers (written and video) on the library website to give other recommendations.

I'll actually start it next month, so we go from June to June, with a kick-off meeting in the library.  I've put up posters around the school, deliberately lacking in detail to raise interest (I've already had "Can I start now?" questions!) and the last week of May I'll include teasers in the morning announcements.   I'll post the handout once I've created it!

UPDATE:  I was hanging the poster in the upper elementary area.  Two of the 4th graders were watching me, asking questions, and commented that 50 book was far too easy, they'd rather read 100.  You can't win for losin'!   We are now having the 50/100 Book Challenge--and I strongly suspect I should have made it the 50/100/150 Challenge!
Posted by jeri hurd at 9:31 PM