Need Some Adventure in Your Life? Work Internationally!

With the bleak prospects for school librarianship in the U.S. these days, several people have emailed me about working in international schools.  So I decided to do a series of posts on teaching on the international circuit:  the good, the bad and the bits that make you pause!

Come With Me To The Casbah!

Have you always pictured yourself on safari in the Serengheti, but never had the money?  Or fancied wandering through Istanbul’s Grand Bazaar, on a leisurely Saturday morning?  With all the budget cuts, pink slips, calls for education reform that blame the teachers and just general economic downturn, now may be the time to make those dreams a reality by becoming an international school librarian.

There is an entire circuit of school libraries out there, in all sorts of combinations K-12, secondary only, primary only, and more, many of them run by qualified media specialists.  Aside from the travel opportunities, international librarianship provides quite a few perks to make it an enticing change from working in the States, the UK or Australia.
TYPES OF SCHOOLS
But first, what exactly is an international school?  Basically, there are three types of schools hiring ex-pat faculty.  The DODDS schools are run through the military, teach an American curriculum and only American students.  They are beyond the scope of these posts, but if you’re interested, you can find out more here: 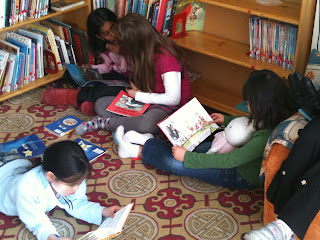 Next are the schools that offer a curriculum based on American, British, German or other national curriculae, but the majority of students come from the country in which you are living (the host country).  For example, I worked in a school in Turkey where we taught, basically, a British curriculum (IGCSE) in grades 9 and 10, but 90% of our students were Turkish. There are also schools that teach a national curriculum for the children of ex-pat workers, such as the oil company schools in Saudi with an American curriculum run by ARAMCO for the benefit of its American employees.
Finally, there are the “true” international schools, with students from around the world.  My current school in Mongolia, with a student population of almost 300, consists of around 40 different nationalities.  These schools may offer either various national curricula, the International Baccalaureate, or both.
That’s a wide variety of schools from which to choose, many of them housing a school library.
While much of running an international school’s library remains the same--promoting reading, teaching information literacy skills, running library programs, you will also find some significant (and exciting!) differences.
Tomorrow:  The advantages of international schools
Posted by jeri hurd at 4:18 AM