The MakerSpace: Equipment and Programming

Once you have the space, you need to add the "Maker" element, which consists of both equipment and programming.

Now, personally, I think there are all kinds of Makerspaces.  The point is to lure the kids in to hands-on activities that get them creating and learning.  Whether that's video production, 3D printing, carpentry/mechanics...it's all good.  Having said that, I was at a Learning 2.013 conference a few weeks ago, and attended a Makerspace un-conference session.  After I showed the panorama of ours, the leader flat out told me: "That may be other things, and it fits your needs, but it's not a Makerspace," then went on to talk about carpentry and mechanics.  Sucks to him, I say.  This is a pilot program with plans to expand.  If you wait around until you have the ideal space and tools, it may never happen. 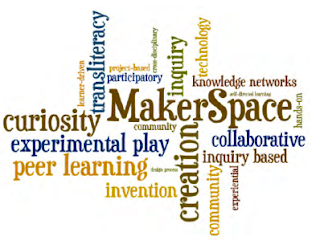 The school already has 3 Design Tech rooms,  two art rooms, and a film and recording studio.  These, however,  are located in a building separate from the high-school.  As an all Mac/iPad school, with a 1:1 laptop program in the high school, ours students do a LOT of video and digital media productions.  We were also starting a weekly TV program in the HS.  We needed a space to both facilitate student production and improve the quality of their work.

After discussion with the Film, Art and DT teachers, we either purchased or re-assigned the following equipment:


Most of it is self-explanatory.  The Legos are for stop-motion videos (or anything else the students think of!).  You might notice it totals far more than the $3,000 I had leftover in last year's budget; the extra comes from this year's budget.  Fortunately, I have a VERY generous budget!

We house the large items in the Makerspace, but keep the cameras, tripods and other portable items in the library for students to check out.

A word about the large-format printer:  We are working to improve the design of both student and teacher posters, banners, etc.  There is nothing more empowering for a student than seeing their work as a large banner in the school--but it has to be good!  In order for students to print their posters/banners on the (very expensive to print) large-format printer, it has to first be approved.  This means it is in it's final format and tested on the regular color printer before it is printed on the large format printer.

UPDATE: I just realized I forgot to include this tip:  We went with a green screen, rather than painting the whole room green, because the green paint reflects on the students when they video.  This not only gives them a rather sickly hue, when you attempt to remove the green while editing, part of the students disappear, too.

Teachers and students will need to be trained in appropriate use of the space/equipment before they can use it.  Fortunately, we have a strong student Geek Force, and I'm working with a core group of them (Maker Geeks!) to provide both training and workshops for students and faculty.

The "official" roll out happens in two weeks, when we have two PD days.  Faculty rotate through a mix of both obligatory and optional workshops.  The Makerspace workshop is obligatory, and will be run by the Maker Geeks.  They will attend a lighting tutorial run by our Film teacher next week, along with a session on the cameras and other equipment.  The Tech Integrator and I worked together to develop the faculty workshop (Brief intro to the equipment, followed by the time to create their own video, which we'll showcase at the end.  The group that uses the most Makerspace Equipment "wins").

We'll give students the workshop outline, along with two practice faculty groups to practice on before the PD days, then leave them to run it (though available if they need help, obviously!)

We're rolling out with the faculty first, using the theory that familiarizing teachers with the space will trickle down to the students.

We'll populate the back walls with poster guidelines for various media:  e.g.  if you're filming an interview make sure you have x,y,z.  Putting together a documentary: these are the steps.   Basic reminders and quality-checks for students, in other words.

The library itself will sponsor various "challenges" or showcases  throughout the year, promoting student use of the space.

Finally (and I need to put these together next week) after each class or individual use of the space, students and teachers will fill out a brief questionnaire, that we'll use for documenting how the space is used, and what improvements would have most impact for next year.