"Respect the Research!": Why We Chose Kuhlthau's Guided Inquiry Model

Being librarian's you'll get my little Me, Earl and the Dying Girl shout out.  I really want this t-shirt, btw. Not the greatest design in the world, but I love the thought behind it.

When we decided to overhaul the way research works at our school, we had a long talk about models.  Specifically, what we use in each of our sections, and what that approach was based on.  A number of inquiry-based research models exist out there (with the Big 6 arguably the most popular in the U.S.), and in one sense they're different treads of the same tire, variations of a  discover, explore, focus, gather, evaluate, synthesize and publish model. If they're basically the same pattern, does it matter what model you choose?

For the eight years I've been a librarian, I've mostly used the Big 6, or (after a few years) a hybrid  I concocted after a) seeing some problems I was having with the Big 6 and b) reading a couple of Kuhlthau's  pre-GID articles.

However, after looking at some of these models, we decided the Guided Inquiry Process provided some strengths lacking in the other models:

It's based on years of research into how students learn and seek information, and grounded in constructivist learning.

They  recommend  a collaborative approach to inquiry design: teams of three to develop the unit and guide the students. These teams consist of the teacher, the librarian and another member as appropriate: e.g.  tech integrator, learning support, school counselor, another subject expert.   These three members help design the unit from the ground up, and are not tacked on as just-in-time one-offs.

It specifically addresses three aspects of student learning: cognitive, affective and behavioral.  In each of their stages Kuhlthau, Maniotes and Caspari (I shouldn't neglect the other authors!)  link what students are doing intellectually with how they FEEL about that, suggesting useful interventions to promote student success.  Moreover, at each stage,  they address not just what students are doing, but what the guided inquiry team should be doing, too. 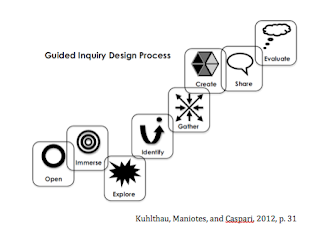 It doesn't skip the questions!!  While I was initially put off by the  model's eight steps (see image), I soon realized it hit one of my biggest complaints about the Big 6, which I feel jumps too quickly from defining the  task to information seeking.  HELLO!!?!   AREN'T YOU FORGETTING SOMETHING??!?

Research, as Jamie Mackenzie has pointed out, is all about the QUESTION....and good research questions are really, really hard.  In fact,  I've moved my "how to write a research question" lesson later and later into the process, as I (too slowly!) realized that students often have to do background research before they can even think about writing a question; they often just don't know enough to understand what the questions even are.  And, quite bluntly, if the students don't have a solid focused, arguable question, based on their own interests (not the teacher's!)  their final product is all but doomed.  The Guided Inquiry model recognizes this and not only builds those steps into the process, it grounds everything in writing that well thought-out question.

Finally, my favorite part of the model is the idea of the Third Space, developed by Carol  Leslie Maniotes.  Student interests and prior knowledge (the first space) merge with curriculum (the second space)  creating a new, third space, where students create personalized learning. This ties in, on a deep level, with all the conversations we're having in the library world about whether the library is just a physical space or not.  It overtly acknowledges that meaningful learning is personal and emotional and endeavors to build that into the process.

There you have our thinking in choosing the model.  Next post, I'll discuss how we went about getting our heads around the nitty-gritty of the model.