No Space? Build a MakerShelf!

I've been thinking a lot about flexible spacing and interactive libraries this year, and realized a bit of rigidity in my own thinking.

Space in my HS is at a premium, and there's really nowhere for the library to expand.  Our "makerspace" is actually a small room in another part of the building (on a different floor even), and it's photography focused.  We also already have three DT labs, complete with machines, 3D printers and all the maker bells and whistles, so when I was honest with myself, I realized we didn't really need another one in the library.  Yet this was very frustrating to my tech-loving, I want an innovative library self. 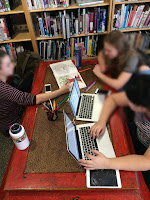 For no particular reason, I dumped several coloring books and sets of colored pencils in our "hang-out" areas. I was almost embarrassed by it, secretly suspecting the kids would scoff.  Who knew? They absolutely loved it--girls, boys, even some teachers.  ALL of them spend time coloring. One girl even told me, "I thought it was dumb at first. But now I think it's the most brilliant thing in the library."  Yet so amazingly simple.   As is the poetry wall we made when I found a bunch of magnetic words buried in the library office.

A few months after this, I presented at the Contexts and Conversations workshop in Beijing,  attending a presentation by the always forward-thinking Katy Vance who is busy re-imagining and re-configuring her new library in Japan.   During her talk, Katy mentioned doing an  über-drastic weed and using some of the resulting shelf space to create a Maker-shelf.  Lights and bells started going off in my head in one of those, "Well, duh!" moments.

Makerspaces are great, but even with the one I have, I fall down on programming.  And while I love that kids can tinker and engage in their own interest-driven learning, I don't want to lose the "library-ness" of the library.  The makershelf, for my library, is a sweet-spot combining student tinkering and creativity with easy-to-manage tools.  So here's my plan.

1) Gut the nonfiction section. And I do mean gut.  I'm in the midst of a pretty ruthless weed of the 0-800 sections.  I discussed this with the relevant departments, and they agreed that most of the information in the books can be found in the databases.  I'm keeping books relevant to extended essays or casual interests. Books that specifically relate to class topics are being reassigned to the classrooms. We need to stop thinking of the library as a particular space: the library is everywhere--it's a state of mind and a way of thinking. Books need to meet the students at point of access where they're most needed, and that's usually the classroom.

Everything else goes.  The shelves are looking pretty barren.   As a side note, I'll be curious to see if/how this affects circulation. There's some convincing evidence that a serious weed helps the remaining collection to stand out.

2)  The cleared shelves will then be dedicated to different maker subjects, based on informal interviews with students about what they'd be interested in having around. Along with the tangibles, each shelf will include relevant books and some basic "how to's" to get the kids started, as well as ideas they can build on.  I  want to give them just enough to get them started, but still leave room for them to have to "figure it out" through discovery.

3)  Shelves will start with the following, but the cool thing about shelves is they can always change, based on student interests.  That's harder to do with large (expensive!) spaces.

Knitting.  I'll say, this surprised me. I think it's kind of dumb, but I thought the coloring books were kind of dumb, too.  And some kids asked for it, so what do I know?

I have more plans--whiteboard tables,   a conferencing table with built-in monitor for collaborating on projects/presentations, better promotion of our digital content. But that's another post.

Would love to hear other ideas!  Post in the comments.