Is it just me?

I must be in a mood today or something. 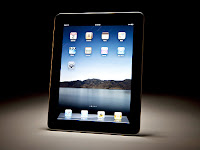 Is anyone else out there disturbed by all the buzz that districts are jumping on the iPad bandwagon as a cheap alternative to computers? That would be a disaster.  And it strikes me as just more evidence that the powers that be are clueless about technology.  The iPad is the latest glitzy toy that screams "Hey, we use technology!  We're 21st Century!"  It's also (at least at this early stage in its career) the complete antithesis of what education is--or should be--all about.

Ed. tech is all about empowering students to interact with their learning, to aggregate sources, mash them up and create something totally new and personal. They become active participants in the conversation, integrating their learning in ways meaningful to them, then producing real content that adds to the ongoing dialogue.

Educationally speaking, the iPad is sooo19th century. It's about passive learning.  Bells and whistles and flashy videos, but it's student as sponge.  Forgive my bluntness, but it's for teachers who refuse to change old habits;  flashing an iPad in the class allows them to imply they're current, without actually having to transform their pedagogy.  Gradgrind would love them.

I had high hopes that adding the iWork suite, which I love, would allow for basic productivity.  But I had a tweet from Wes Fryer in my feed the other day, and Keynote wouldn't work with links, wouldn't play video he had on the iPad, was basically worthless as a presentation tool.  One hopes Apple will improve this, but I doubt it's going to add much more productivity to the iPad, if only to avoid cutting into its computer market.

Do I want one?  You bet!  It's going to be great for taking books to Mongolia. If I had to choose between that and my laptop, however, the laptop would win hands down because of everything it allows me to do.

If you're district is even considering this, start protesting frequently and vociferously!
Posted by jeri hurd at 3:04 PM

Email ThisBlogThis!Share to TwitterShare to FacebookShare to Pinterest
Labels: ipad