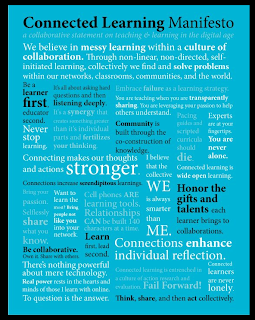 1.  Sheryl Nussbaum-Beach posted this image on FB today. It's not anything new, really, but it's a good compilation of the general philosophies and attitudes that should be driving libraries and classrooms--specifically, that learning is not only messy, it's often best when the teacher doesn't know the answers, either.

2. I've also started exploring Makerspaces, having received the head's up from Buffy Hamilton, who is always way ahead of me on these things.

From what I've read so far, they seem the epitome of student-centered (and student-driven!),  project-based, exploratory learning.

3. This will seem like a tangent, but it ties in.  Trust me!

When I was at that baking class last week, we were making puff pastry, and I asked the instructor why anyone would go to all the trouble of laminating the dough, when KAF has an incredibly easy recipe for Blitz pastry that turns out the flakiest, most tender dough I've ever made, in mere minutes.   She was surpised I'd tried, especially on my own, and said they have entire classes on teaching people to use it, and that halfway through most of them want to bail because it looks like such a mess.  She ended, "Kudos to you for trying it and soldiering on!"

Ever one to take praise wherever it's offered (!),  I've still been thinking about that comment, and how it applies to my general attitude towards teaching.  Heaven knows I am far from being a Master teacher, but I will say one of my strengths is that I'm willing to leap in and try new ideas, even if I have only the faintest idea what I'm doing, trusting that the students and I, together, will figure it out.  My first attempt at documentaries and (more recently!) Antigone on FB are prime examples of that.

I also realize not everyone would see this trait as a strength!

It's at the heart of those first two points above, however, because some of the best learning my students have done happened in those "let's try it and see what happens" projects.  Both Makerspaces and Sheryl's "manifesto" mandate valuing exploration and risk-taking.

But here's the thing.  Our current focus on education reform privileges data-driven practice, and I wonder if these two philosophies are in opposition?  To what extent will the need for documented evidence limit innovation and exploration?  Will teachers be willing to step out on a limb, if someone is going to saw it off because they don't have the statistics to prove their theory?

It's important to ground our practice in proven methods, but it's also important to be willing to try something that, based on our own experience and educated judgment, seems like it might work, even if we don't have specific evidence for it.  For students (and ourselves), that is real learning--figuring it out together as you go, collaborating and problem-solving and, yes, documenting the results, whether it works or not.

Failure is learning opportunity, too.  We've all had our botched lessons and units. It's part of the process. Data-driven pedagogy can help limit those failures--students shouldn't always be our personal guinea-pigs!--yet it's important to allow for new possibilities, also.

So we have a tension--a creative tension?--between our need for play and innovation, and the need for tested best-practice.  We need them both; I just worry we're losing innovation in favor of the data.