Yesterday I posted the link to my iBooks lesson on primary sources.  If you have access to an iPad or iPhone, I hope you take a look at it.

Today,  I'll give you my thoughts on iBook Author (iBA).  Having spent 13 some odd hours with it this week, I have a fairly good understanding of its capabilities and some of the kinks.

First off, I like it a lot. I spent at least two of those 13 hours watching the iBooks tutorials on Lynda.com, which were helpful but not actually necessary (there's also a free course on iTunes U).  If you have any familiarity at all with the iWorks interface, you'll feel right at home with iBA, as you can see from the image below. 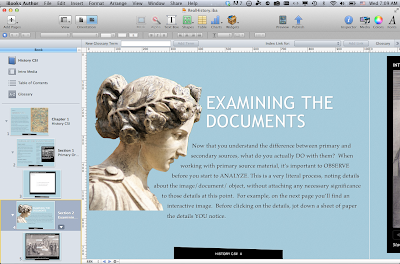 For those more used to the MS Word interface, your biggest issue will be getting used to working through the  inspector, a pop-up panel where much of the formatting happens.  Handily, unlike with the iWorks apps, Apple also makes many of those formatting functions  available in the toolbar, where Word people would expect to find them.

iBA, a free download,  comes with six templates; for $9.99 you can buy another 20 well-designed templates from Jumsoft,  which was much better pricing than the $20/template here. I used one of theirs for the Real History book. Of course, any template is merely a starting point, and all of them are customizable, or if you're a lot better at graphic design than I am, you can just start with a blank page.

I won't go into the how-to details, as there are plenty of resources for that . I'll just review the pros/cons of the app.

STRUCTURE GRIPE
My biggest complaint,  just to get that out of the way, lay with the Table of Contents formatting.  If you want your ToC clickable (and of course you do!), you are tied to the Chapter/Sections structure built in to all of the templates.  Use those page styles, and iBA automatically adds them to the ToC,  in order.  That particular structure isn't always appropriate, however,  and you're out of luck if you don't want to use it, as far as your ToC goes, because you can't make your own interaactive ToC.

Moreover, it didn't work all that well.  Given that I was tied to that structure, I grouped my lesson into two main chapters--the first on explanatory material, the second on actually working with documents. Then I had sections within each of the chapters.  That's where the problems started.

When you're starting a new page, you  choose to make that page 1) a Chapter, 2 section head or 3) just a regular page.  That choice affects how the page is dealt with in the ToC.  What's supposed to happen in the ToC, is that sections are just listed on the Chapter page, as here. 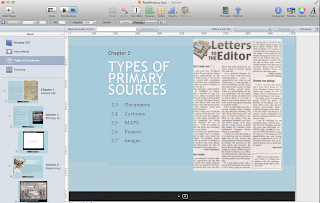 But iBA for some reason, gave a couple of sections their own page, like a chapter, even though I used the same section page style.  It's not that big a deal, but if you're aiming for continuity, it's annoying.

In addition, instead of using the image that was on the page, it left the image space blank. When I added it on manually, it then added it to every other ToC page, too.  After a half hour of fiddling with it to no avail, I just deleted the page and did it all over from scratch, at which point it worked fine.  Go figure. 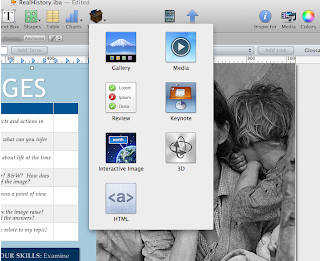 Of course, iBooks Author is all about the widgets,  and there are six of them, allowing you to add :

You can also get a few more widgets at ClassWidgets, and iBooks Widgets.com  The latter is in Beta, and not actually live yet, but they sent me a very nice email when I signed up, and actually wrote personally to ask what types of widgets I would like to see available.

In the lesson I created, I used the image gallery, review, Keynote and interactive image widgets. Most of those do exactly what you expect them to do, so I'll just discuss the review and 3D image widgets. 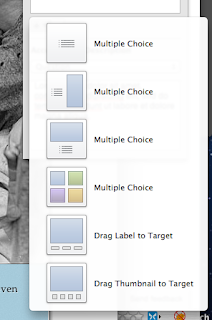 The review widget gives you several options from which to choose, as seen in the image to the left. I used the straight multiple choice and the Drag thumbail to target.

I wanted to give students a section where they had to decide whether multiple items were either a primary or secondary source. Actually, I just realized I could have used the multiple choice with an image for that (Duh!).  But I was in playing mode, so used the Drag Thumbnail option.  That meant I had to create an image with Primary/Secondary as my base image, then students would drag a thumbnail of the object onto the appropriate section.

More clunky, but a bit more interactive.  The widget provides anchors, and students drag the image to the anchor they believe is appropriate.  Obviously, this is meant more for labelling tasks.  The problem I ran into was when I tried doing multiple thumbnails.  There were 3 anchors on the primary section. Obviously, it didn't matter which one was which, only as far as the widget was concerned it did; so unless students happened to put the thumbnails in the same order on the primary section that I had, they were marked as wrong.  So I had to do a series of individual ones instead.

I was most excited about this one, imagining embedding images of sculptures that students could manipulate, until I realized you had to make the 3D image yourself! Aack!  I am seriously art-challenged, so while that is theoretically possible in, say, Google Sketch-Up, it's not something I'm going to be doing soon.  Still, if you're buddies with the Design Tech teacher s/he could always do it for you, or ask one of the students to do it.

As it currently stands, the widgets available aren't all that participatory or thought-provoking. I hope this changes as companies have time to develop more. Here is a short list of what I'd like to see:

As  I said, I like it a lot.  I've mentioned before I want to digitize all of my lessons this year. iBooks isn't appropriate for ALL of them--some will be in video--but I can see using this for many of them. Unfortunately, the interactive stuff right now is limited mostly to manipulative items, rather than student input/thought.  I hope that changes over time.

The other big draw back to this is your (or student) efforts will only be available in iBooks.  Since my next school is Mac 1:1, that's less of a problem, but Apple really needs to make an iBooks App for the Mac.  Since they haven't done even that yet, I don't see one coming for a PC any time soon.