One of my favorite activities during Literacy Week was the library mystery, which I mostly aimed at the middle school students.  I wanted a quick, daily activity that I could start during our break, but then the students could continue working on during the day.  Each day's activity would lead students to a set of clues, and each day the clues would point more directly to the guilty party.

THE SET UP
Having spent the previous week making announcements to build suspense and interest in the library mystery, on the first day, about 12 students showed up during break, eager to begin.

As I chatted with the students, my aide came running up and, very dramatically,  declared an important book had disappeared. Much "oh no" and "what shall we do" ensued, during which I enlisted the twelve students as my detectives to help solve the mystery.  I gave them this handout and explained the game:

1) Each day at break they would come to collect a new puzzle to solve.
2) Solving the puzzle, would give them a clue.
3) Solving that clue would lead them to the new set of mystery clues for that day.  By analyzing the clues each day, they would be able to deduce the culprit.

The first puzzle (a dystopian crossword) I came up with myself.  It took so long, I admit I gave up and just looked around online to find other puzzles I could use.  All the puzzles were based around books, of course.  Originally, I wanted to do a different genre for each day, but I waited far too long in setting those up, so most of them ended up being based around dystopian and fantasy novels.  Next year.....

Shade in the boxes of letters to spell out, when rearranged,  the name of an author (alduous huxley for me).  Their first set of mystery clues were hidden in Brave New World. I also attached a hint to suggest in which of his books they should look (1) The title comes from a famous line in Shakespeare's The Tempest.

For the next  puzzle I found a Harry Potter anagram site and put together this handout. Again, the letters with an * spelled out (in order this time) the title of another fantasy novel.

For the third puzzle, I just found a Lightning Thief crossword Puzzle and highlighted letters to spell out the name of another book.

THE CLUES:
I'm not the most logical, analytically minded person in the world;  I created the chart  below to help me devise the clues.  I did check the with "suspects" before-hand to ensure they didn't mind being accused of book theft!   You can just substitute your own teachers for the set of clues here, or create your own.

Basically, when writing the clues, I tried to:

1) Create clues that developed a (very basic!) plot and established either means or motive (sometimes both)
2) Throw in several red-herrings.
3) Add enough additional clues to negate the misleading clues, in order to narrow it down to one person.

Here are the clues.  I divided them into three sets, one for each day of the mystery, with the clues growing more and more obvious.  On day two,  I had the suspect write an actual note (for clue 11) to include in the book (thereby adding another clue, if the students' knew her handwriting).  The two books in the final clue for day three are directly related to information most people know about the suspect (who is our Secondary Head): i.e. she speaks German, and disciplines students.

Do the clues completely eliminate all suspects?  Not really.  But most of the students guessed correctly.  The teachers also had fun being cryptic as students ran up to them asking questions to try and clarify the clues.

Now that I have the hang of it,  next year I'll try to make the clues more logical, so that they really can deduce the criminal from the evidence.  BTW, here's the chart I used to help figure out the clues. 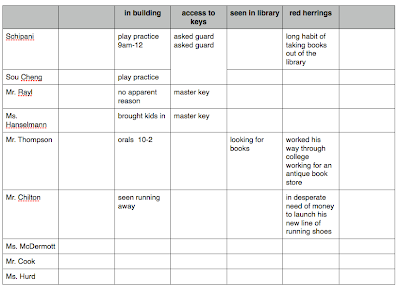