By the Numbers: Infographics, cont.

Are you growing tired of Infographics yet?

We've finished round one of the Infographic Project, with lots of interesting feedback.
You'll see student samples throughout this post--the best of the lot; most of them, quite frankly, didn't quite get it, for reasons I'll discuss below. In a nutshell, we deemed the assignment well worth another go, and feel students will do a better job the second time around.

The assignment was for students to choose a specific tourist destination such as EuroDisney or Hurghada, Egypt, and show how the site fit into the Butler Model of tourism.  As it turns out, that probably wasn't the best assignment for this type of project, as the research aspect was really difficult. Very hard to find specific data on that.  Another group is working on Chinese migration, and that is FAR easier, as it's far more numbers-based and data-driven.

Here's how we rolled out the assignment.

Day One:  The history teacher introduced the assignment, explained the Butler model and looked at examples of it.

Day Two:  I introduced the students to infographics using this pathfinder.  They spent 15-20 minutes exploring the various infographic collections in small groups, generating lists of the different elements making up an infographic. Student were instructed to consider both content and design. Then, as a large group, we brainstormed a pretty comprehensive list of what goes in to designing an infographic. 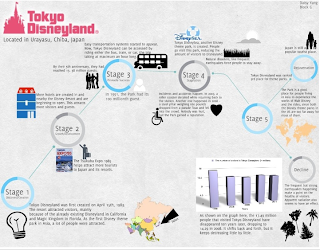 Using Twiddla, I loaded a sample of a not-so-great infographic and had them  evaluate it using our criteria.

Finally, we talked about the specific research problems they might face--finding hard data, and discussed strategies for that.

Day Three:  After a quick tour of Easel.ly, students spent time researching. I chose Easel.ly (rather than PiktoChart) because it offered more graphic options, and seemed pretty straight forward.  But I also made a point of mentioning students were free to hand-draw their infographic if they were so inclined, or use other programs.

After that they had a weekend, and their drafts were due on Tuesday.  I wasn't around for that, as I had other obligations, but they did some peer feedback before turning in their final copies on Thursday.

I came into the class that day to do  what turned out to be a very interesting whole-class discussion for feedback on what worked and what didn't.  (Easel.ly, I hope you're listening!) 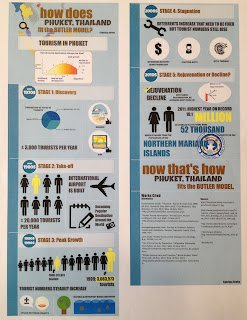 1.  Students had problems working with Easel.ly, and some switched to Piktochart, others just used Pages, Apple's graphics oriented word processing software (Just as a point of info, I only use Word if I have to these days. Almost everything I write/design is in Pages.)
Their issues revolved around:

On the positive, it offers a more extensive (and better designed) collection thematic templates than PiktoChart. It also offers a better collection of graphics than PiktoChart, though the latter has improved on this from when I first considered it as a tool.

Aside from tool issues, we also asked them about the assignment itself, and this is where it got really interesting. Students had mixed responses, with some enjoying the assignment and others less enthusiastic, shall we say. 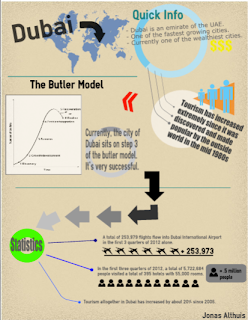 When we specifically asked whether they would rather do an infographic or a Power Point presentation, for those who chose the latter, it was specifically because they thought it was easier. As one student commented, "I don't have to think about a Power Point, I just put everything on it."

Which is where I got excited.  Across the board, whether they liked it or not, students gave the same reason:  I had to think about this assignment differently.  I had to be selective about the information I chose to use (see the video interview below). Students were either excited by the challenge or resistant to the extra mental effort.

That, I think, is the power behind infographics, and why we plan to use them again.  Generally,  when students research, it's about quantity rather than quality, as any English or History teacher can tell you.  Students take everything they know, throw it into the paper and hope something sticks.  With an infographic, they can't do that. An infographic forces them to

Heck, I struggled with this--and precisely because it's a very different way of thinking for verbally-oriented, English teacher me.  But in this increasingly visual world, students MUST be comfortable with not only analyzing media, but with creating well-designed, graphic-based media themselves.

So, for a first effort, we're very pleased with the results, and the students' thoughtful self-reflection. We believe, as with most endeavors, students will improve with practice as they grow more fluent in (and comfortable with) their visual thinking.

BTW:  I forgot to add--one thing we didn't do, and really should have,  was have a day in class to sketch-up a draft, and get feedback both from us (the teachers) and their peers.  We did this informally, but we should have talked more specifically about design and layout once they were ready to start creating.  We'll definitely add this in next time.