Do you ever feel like we're constantly re-inventing the wheel?  Web 2.0 can be something like that,  as we run across  new or, at least new-to-us apps similar to other apps we're already using.

Having jumped on the iCyte wagon, I groaned inwardly on discovering Evernote.  Another web-based notetaking app! But I must say, I like it. It straddles a fine line: more feature-rich than iCyte (and thus a bit less user-friendly) yet not as confusing as Diigo.

Moreover, it doesn't just store your data in the cloud.  You can download a desktop app, a smart phone app, and they all sync with your online data, making your notebooks available wherever you are.

While that's very useful, I think the notebooks make Evernote the go-to app over, say, iCyte and Diigo.  All three allow you to capture websites, make screen grabs, etc.  Only Evernote allows you to sort them into folders or notebooks.  While diehard social taggers consider folders so 20th century, most of us like the extray layer of organizaiton it allows.

Here's a screen-grab of the desktop application.  In the upper right you can see I have three folders created, though currently it's showing all the material in all the folders.  That includes photos taken with iSight, to do lists I created on the iPhone, as well as websites I visited and documented. 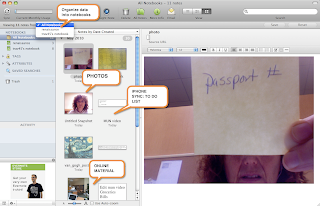 In the online version, you can see similar features.  Here, I've selected the "renaissance" folder, and the screen shots of those websites appear.

If I click on one, it becomes editable, with a nifty feature showing the URL and the date I grabbed the shot (great for citation).

Create a new text note (in rich-text format, I might add), and it can either be straight-forward text, in a clickable to do list format or a table.  Though I must say, that function needs some work.  To make a to do list, you have to go up to the icon and click it for every new line.  VERY annoying and time-consuming.  You ought to be able to click it once, and have the rest of the note in the selected format.

In edit mode, users can also attach files to documents.  For example, if students took a screen shot of a painting, and they downloaded an article about that painting from a database, they could attach the pdf file to the shot of the image.

Like iCyte, Evernote worked with the databases--in fact, it could either just select specific portions, or grab the entire article, which was nice.  If I opted to just grab sections of an article, I could separate them with a line tool, making it easy to distinguish among the sections, instead of having one long block of paragraphs.

Students doing multimedia projects would find this especially useful for keeping their material organized, and I'm thinking of my documentary makers here.   They can collect all of their online research, use their smart phones to add B-roll images of documents or stills, as well as record audio interviews.  Once all of this is synced onto their laptop Evernote app, it's draggable to be used in video editing software.

Of course, this is imminently usable for personal organization as well.  Though I find all of management apps fall apart in one area for me:  they assume I'm organized enough to put all that info in the app in the first place...which I'm usually not.
Posted by jeri hurd at 1:16 PM